Few days ago, one of our farmhand in Mahanad, Budho recounted a heart-breaking tale involving his cousin sister who had suffered massive crop damage in her hometown located in a neighbouring state.It

It was nothing to do with untimely rains or drought or any other whimsical act of nature, but something purely man-made—a guided tour of disaster, planned and sponsored by agriculture experts who swear by deadly cocktails of pesticides.

Reckless use of pesticides had rendered the woman’s tiny strip of land lifeless. No matter how many more litres she poured into the soil, the ‘pests’ wouldn’t go away. In fact, they would come back with vengeance—some of them she had never seen before.

She would once again go back to the experts and come back armed with some more bottles. The next day, she would release the trusted ‘genie’, hoping for a magical turnaround.

But what came out of the bottle was an imagination—nurtured in swanky laboratories and let out lovingly to destroy life on earth with ghostly efficacy.

Quite often, one loss begets another. Going by the pained narration by my friend Budho, it seemed that the hapless woman’s greater loss was loss of faith in farming itself.

This fanciful mental illusion, this whole mad endeavour in pursuit of perfect farming solutions using pesticides had emptied her heart out and robbed her of her ability to love the soil.

Although such horrid tales are not rare anymore, what got me thinking was this:

By the way, that’s Budho in the picture. 🙂 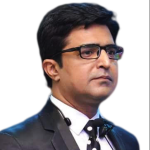 This author does not have any more posts.